We are all home, safe and sound, and we would like to share our experiences from the second half of the trip, the Hike for Humanity portion. Our group, joined by Andrés Villalobos (ISL Team Leader) and Dr. Jack, Lisa Ann, Cathy, and Mary Beth (the new volunteer members), left for Talamanca bright and early on January 5, and travelled for most of the day to our base camp. The base camp was an unfinished church that will be the Sistine Chapel of Costa Rica when finished. It boasts many forms of wildlife including but not limited to man-eating spiders, Leish-carrying sandflies, loud cattle in a nearby field, and screeching frogs. We walked in and our leader Abdi said, “welcome to the jungle.” 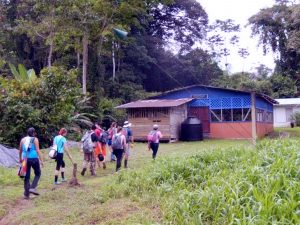 After exploring our surroundings, we settled our sleeping bags into the construction foam that we scored from the girl’s bathroom.  As we fell asleep we had to make the crucial decision whether to cover every square inch of our bodies, leaving an air hold of course (as Lane did) and dying of heat stroke, or sleeping outside of our sleeping bags and exposing ourselves to thousands of mosquito bites.  Many of us lost a significant amount of water weight that night. Jerry was as cool as a cucumber in his hammock, but as he bragged about his comfortable sleeping situation he was the only one to have mosquito bites in the morning. Along with the extreme heat, our team had to endure several other challenges throughout the night. There were also mooing noises coming from multiple sources: the cows in the nearby pasture and Conrad’s alter sleeping ego. And of course ISL doesn’t put earplugs on the packing list for no reason: everyone and his brother snored that night. Waking up so many times a night interferes with the reviews of normal pattern of sleep causing more time to be spent in light sleep than in more restorative, deeper sleep. 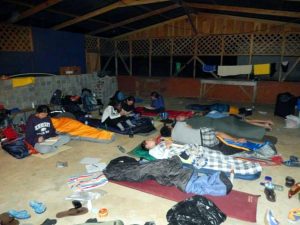 After waking up, we packed our bags once again and moved on to the real destination: Shuabb. We took a bus as far as we could, and then unloaded all of our supplies into a hand carved boat, that a local taxied across the shallow river using a bamboo stick. 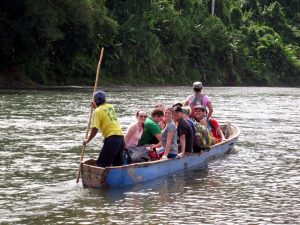 Once at the other side of the river, the “real” hike began and we made our way through the jungle to the small village of Shuabb, with plenty of photo ops along the way of leaf-cutter ants and “sleepers,” introduced to us by Andrés. As the team looked out to the Panamanian mountains, we heard a cry and saw Betsy’s legs straight up in the air. She was still getting used to her hiking boots and had taken a major fall into the ditch full of thorns!

Upon arriving in Shuabb we were shown our living quarters, which was an upgrade from the previous camp. The only main difference was that instead of sleeping on a bed of construction foam, we instead slept on a bed of ants and cockroaches. After a day of travel, we eagerly awaited a shower but we were pleasantly surprised when we learned we would be bathing in a small stream instead. While chilling in the communal shower, the team agreed that it was a great bonding experience and that “those who bathe together, stay together.”  Our fearless leader, Abdi, was not able to submerge himself in the icy waters so he instead asked his worker bees to splash him. You would have to know Abdi to know how absolutely hilarious his monologue from the stream was. It went something like this:  “Ohh I cannot get in the water, the little fish will bite me. Ohh no it’s too cold! Splash me! Splash me!” 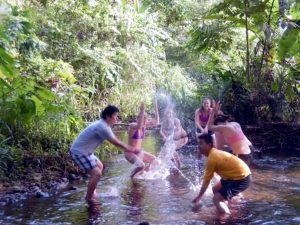 After freshening up a little bit we started doing house visits by hiking in groups to every house in the small village. We were amazed by their beauty and craftsmanship and by the different styles, from log cabins to tree houses. We were also surprised by how much livestock all of the households had. The chickens, pigs, and turkeys showed us their self-sustaining lifestyle. Several of the people we saw during house visits had Leishmaniasis scars and other symptoms completely different from the ones we saw during the urban clinics. We ended the day with bathing in the river and passing out early, exhausted from the full day of travel. 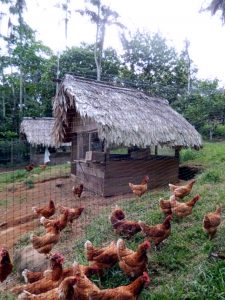 The next day we were up once again for our first clinic in Talamanca. There were several families waiting for us as we arrived to the local school to set up the clinic. We were impressed by the artwork that covered the walls and desks, painted by the local students with labels written in Bribri, their indigenous language. As we formed our groups and met our first patients, we encountered a lot of requests for anti-parasite medications and anti-fungal creams for foot fungi caused by the rubber boots that most of the villagers wear on a regular basis with no socks. As the day went on we heard several stories that really showed us how many things we take for granted back in the United States. 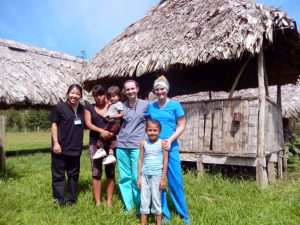 One of our favorite patients that day came in with swollen and sore ankles and lower calves. After getting more into the history of her present illness, we found out that she had just returned on foot from Limon, while carrying her two-year-old son who is off the charts for height and weight. Eight days ago in the middle of the night she frantically started the 5-hour trip to the nearest clinic when she first noticed that her son was struggling to breathe. Shortly after leaving the village, as she was about to cross the river, her son started turning blue from lack of oxygen. His symptoms began three days before with a simple cold, but worsened as she made her way to the clinic. When they arrived, she was told that the small clinic did not have what they needed and that they could only provide some oxygen as they waited for an ambulance to take them to a larger clinic. The next clinic told them the same thing and they had to go all the way to the capital for proper treatment. They spent 8 days isolated in a small room to prevent the spread of bacterial pneumonia. The mother was shocked when she realized the cause of her symptoms, which in return shocked us! We were also surprised by the playful attitude of the recently sick boy running around the clinic, stealing everyone’s heart as well as all of the stickers, coloring books, and crayons too. 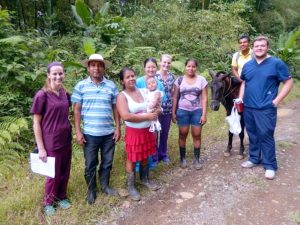 After reluctantly leaving Talamanca, we were whisked away to the Caribbean side of Costa Rica. At the hotel we spent our free day talking to a parrot, fighting rip tides, and dodging feces-flinging monkeys, poisonous yellow vipers and massive bullet ants. We were left questioning whether the sloths were actually alive or not (they really do not move). The national park was “Pura Vida” at its finest, and we were sad to realize that our trip was coming to an end. But then, Abdi ran across the beach, Baywatch style, to inform us that there was one last surprise…ziplining!!!  We raced back to our hotel and packed our smelly bags in record time, searching for that one pair of clean socks to get us through the day. So on the way to La Dehesa we stopped to go ziplining at Sueño Azul. Those two hours were among the most “Pura Vida” of them all. On our second line it started pouring down rain, which only made it more surreal, and we finished soaking wet with dark brown stains from the wet leather equipment on our very last set of clean clothes. At that point it was much easier to make
the decision to get into the waterfall that was in After Earth, a sci-fi movie made in 2013. For the rest of the trip we listened to amazing music provided by DJ Conrad and listened to Stephanie, our awesome interpreter, sing every word perfectly in her non-native language. 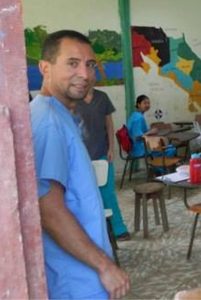 We returned to La Dehesa for our last night to say goodbye to Flora and many other people we met along the way. The next morning we had our final passport check (Conrad’s was taped to his chest for two weeks anyway) and a sad goodbye to our fearless leader, Abdi. On the trip back we talked about how life changing the experience was and how we are dedicated to continuing our service to the world, whether or not we go into the health profession. We hope to build upon this experience with many more trips through ISL in future years. Booom!